Menu
Home » news » UNBELIEVABLE: Another Mortuary Attendant Drops Scary Details On What They Do & Why He Don’t Ej!@ culate Inside Dead Bodies {Must Read}

UNBELIEVABLE: Another Mortuary Attendant Drops Scary Details On What They Do & Why He Don’t Ej!@ culate Inside Dead Bodies {Must Read} 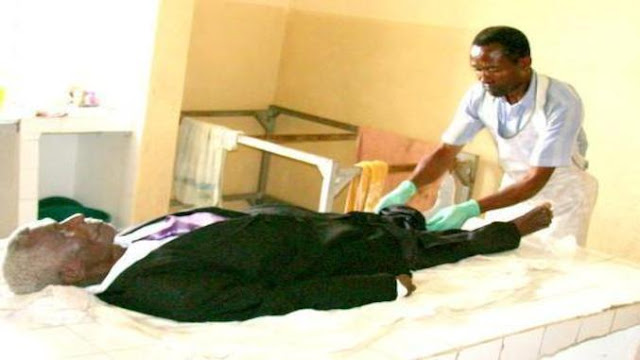 A 45-year-old Ghanaian mortuary attendant identified only as Kwadoo has confessed to having s*x with all the female corpses brought to his facility to be embalmed.
Kwadoo who was interviewed by a radio station in a local language insisted that he does enjoy s*x with the dead bodies just as much as he enjoys with living women.
In the interview, Kwadoo who works in the mortuary located at Akyem Tafo in the Eastern Region boasted that it is part of his job to sleep with all the female dead bodies brought to him and that he enjoys the s*x so much and has been in the act for over 10 years.

He added that he has been sleep ing with the corpses wherever he worked including in Accra, Kumasi, and that he is very careful not to impreg nate the corpses.

“I don’t see it to be wrong at all. Yes, I have s*x with them but all I have to do is to ensure that I don’t eja culate in the dead body because it could get preg,n@nt in the afterworld;


I may be haunted by the spirits if they get preg,nant. It is same as normal s*x and I enjoy it very much,” Kwadoo was quoted as saying.

Posted by mediacop
Labels: news
Email ThisBlogThis!Share to TwitterShare to Facebook
at 07:27