Menu
Home » news » The Hausa man who vows to kill himself if Kanu is released few months ago, see what he is saying again.

The Hausa man who vows to kill himself if Kanu is released few months ago, see what he is saying again. 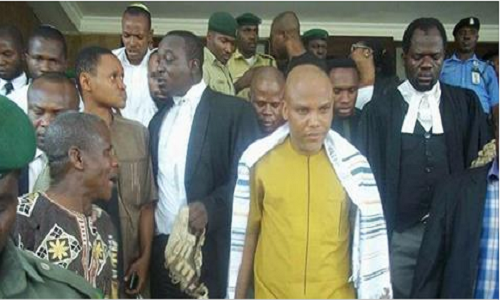 Do you remember the northerner who posted “I Will Kill MySelf If Nnamdi Kanu Is Released” some months ago?
He still insists he will commit suicide if Nnamdi Kanu is eventually released.
See what he posted yesterday after the Federal High Court Abuja granted Nnamdi Kanu Bail
(See Screenshot below):

Below is his original post in March 2017:
I Will Kill MySelf If Nnamdi Kanu Is Released
I will even upload pics of me drinking poison here.
What kind of rubbish is this.


The court is dropping charge for a man who solicited for arms.
For a man who openly ordered the killing of any Hausa man that is near by if the court don’t know this is the audio of Kanu ordering the total killing of Hausas below in Biafra land.
For a man who accused Buhari and all APC people of supporting Boko haram.
A man who openly ordered for the killing of soldiers in Aba.Any judge that free that terrorist is an enemy of the state. Because the 11th edition Oxford defined treason No1 as betraying your country.
So the judge should be punished as someone assist someone committing treason.
Kanu also said on this last audio that his Ipob humble boys buried some soldiers in Igwocha and Aba.


So why on earth should the court be lenient with this kind of harsh terrorist.
After ordering the killing of innocent people in those audio evidence so u mean he will now bribe the judges and go free. After hearing that audio evidence

Posted by mediacop
Labels: news
Email ThisBlogThis!Share to TwitterShare to Facebook
at 07:26