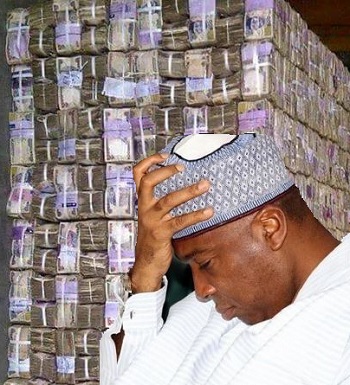 Some of Senate President Bukola Saraki's aides involved in the November 20, 2015 theft of N310 million being transported to the senator have disclosed why they stole the cash. The aides snatched the cash from a bureau de change operator at 5 Nana Close, Maitama in Abuja.
Tracked down by SaharaReporters and speaking anonymously, some of Mr. Saraki’s aides, who are currently on the run, said the senator was in the habit of warehousing large volumes of cash, mainly for use as bribes to judges, investigators and prosecutors to ensure the scuttling of his trial for false assets declaration by the Code of Conduct Tribunal (CCT).
The theft, first reported by SaharaReporters, featured five officers of the Department of State Security (DSS) led by Abdulrasheed Maigari, the most senior of the DSS officers attached to Senator Sarak‎i. Mr. Maigari hails from Dungo local government area of Taraba State. The other DSS officers involved in the heist were Ibbi George from Adamawa State, Patrick Ishaya from Plateau State, Peter Okoye from Delta State, and Solomon Yunusa from Kogi State. Other participants included four other aides of Mr. Saraki and five serving military officers led by one Captain Hassan Mshelia.
The aides at large revealed to a correspondent of SaharaReporters that Senator Saraki often used a house, 18 Lake Chad Crescent, Abuja, as a warehouse for illegally acquired money. They said huge stashes of cash from First Bank Plc. branch located at Coomasie House in Abuja were often stored in the house. The aides added that the funds were then moved on behalf of the Senate President for use in a variety of special “political assignments” ordered by Mr. Saraki.
The sources said cash was regularly moved from the bank and the house on Lake Chad Crescent to Mr. Saraki’s mansion at 5 Nana Close in Maitama, from which lawyers as well as judges and their designated representatives collect the cash to obstruct justice.
They said Mr. Saraki regularly used five of his official security aides, supported by five soldiers usually chosen by Paul Ibok, his Chief Security Officer, to move the funds. The aides disclosed to SaharaReporters that, between October and November 2015, there were three cash movements to No 5 Nana Close.
According to them, the cash was usually received by Mr. Saraki’s Deputy Chief of Staff, Peter Makanjuola, who also has the duty of distributing it to judicial officers with whom various deals had been struck regarding plots to scuttle the Senate President's trial.
In one instance, the aides disclosed, N550 million was delivered to Justice Alfa Belgore, a former Chief Justice of Nigeria, to carry out an illicit assignment of obstructing justice on behalf of Mr. Saraki. On another occasion, DSS officers working with soldiers took the sum of N370 million to a venue. According to the wanted DSS operatives, the Senate President had 23 DSS operatives attached to him. The DSS officers are split into two teams (A and B), with both teams taking turns to provide security for the Senate President, who lives in an eight-bedroom official residence. The building, known as “White House,” shares a wall with the official residence of the Inspector-General of Police.
Our sources said that, having observed the unrestricted movement of large sums to Senator Saraki’s home, some of his DSS aides also developed an appetite for cash. Thus, on November 20, 2015, an aide of Mr. Saraki directed the leader of Team A, Ibrahim Shariff, to call Mr. Maigari, who had been off duty, to return to work for a “special assignment”. On his return, Mr. Maigari was told to join four colleagues and five soldiers to go meet one Ibrahim Kabir, a First Bank employee, to pick up money for the Senate President. They said Mr. Kabir happens to be the account officer for Hassan Abubakar Dankani, Mr. Saraki’s favorite bureau de change operator. One longtime associate stated that Mr. Saraki had been using Mr. Dandani to launder funds since the senator’s days as the governor of Kwara State.
Our sources said that, with the increasing scrutiny on him, Senator Saraki had decided against using the DSS officers attached to him to escort cash movement. Instead, the senator asked the management of the bureau de change to make their own arrangement for security escorts to move the cash to Senator Saraki's home.
However, with their own growing hunger for money, Senator Saraki's security details had hatched a plot to corner the cash. And they recruited other colleagues and Captain Mshelia. Dressed in military fatigue, the security agents positioned themselves near the senator’s home and ambushed the vehicle in which the bureau de change operator was conveying the cash. SaharaReporters learnt that the security officers told those moving the cash that they were under arrest for money laundering. The police officers hired as escorts by the bureau de change operator had to leave the scene when the DSS men showed their identification tags, which gave the impression that they were on legal duty.


Once the policemen had left, the DSS officers, including those attached to Mr. Saraki, told the bureau de change operator that they knew of the destination for the cash and that moving huge sums of cash outside the banking system was illegal. The DSS officers then demanded N350 million in order to allow the vehicle to proceed. After a period of haggling, the officers settled for N310 million.

Posted by mediacop
Email ThisBlogThis!Share to TwitterShare to Facebook
at 07:23