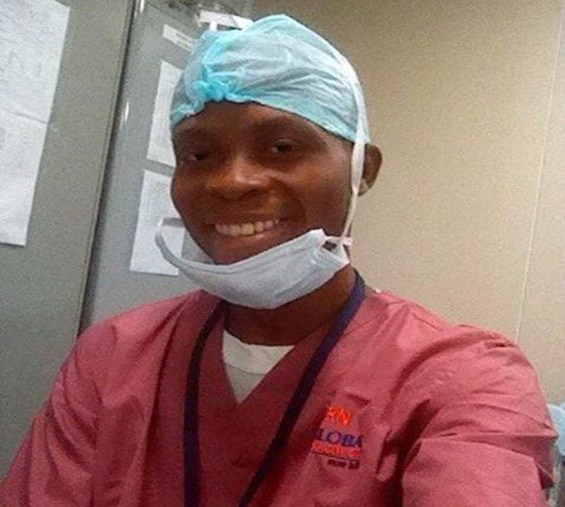 In a sad suicidal move, a medical doctor, Allwell Orji, jumped into the Lagos lagoon on Sunday the 19th of March 2017.
The incident happened at 4:45pm on Third Mainland Bridge when 35-year-old was on his way to Victoria Island where he was going to attend a Medical and Dental Council of Nigeria (MDCN) meeting.Orji, who left from his house at Abule Ijesha in Yaba, was said to have told his driver, Henry Ita, to parked his Nissan Sports Utility Vehicle (SUV) marked LND476EE at the Adeniji Adele end of the bridge on the excuse that he wanted to pee.
As he came down, the doctor was said to have climbed the bridge’s rail guide and jumped into the ocean.

Orji is said to be a staff of the Isolo branch of Mt. (Mount) Sinai Hospital.


A commercial bus passenger, who gave his name as Uche Magnus, said the doctor jumped into the ocean immediately after he came down from his vehicle.
Magnus said: “I saw everything clearly from where I sat in the commercial bus I was in. The man came down from his jeep and jumped into the water instantly. We all screamed and begged the commercial bus driver to stop. I saw the man when he jumped but nobody could identify the spot where he drowned in the ocean.”
In the ensuing confusion, Ita was said to have called Oji’s mother and pastor. Both arrived the scene some 30 minutes after. It was learned that the sympathisers at the scene called the Lagos Police emergency unit, which deployed Rapid Response Squad (RRS) riders and marine police to the scene.
When The Nation got to the scene at 5:30pm, the Divisional Police Officer (DPO), RRS Area Alpha Commander and Officer-in-Charge of Marine Police Team were coordinating rescue operation. The response team of the Lagos State Emergency Management Authority (LASEMA) was also at the scene.
At 5:50pm, Oji’s SUV and his driver were moved to the Adeniji Central Police Station.
When asked to explain how the incident happened, Ita, who was yet to come to terms with the incident, said could not utter a word as he was being led into the DPO’s office. He folded his arms and looked at the floor.
Orji’s mother was restless, as she was being consoled by the pastor. The pastor came out of the DPO’s office to pray beside Oji’s SUV. As he said the prayers, he moved round the vehicle with the hope that the rescue operation will bring the deceased back to life.
As at the time of this report, the body of the deceased is still being sought for.

Posted by mediacop
Labels: news
Email ThisBlogThis!Share to TwitterShare to Facebook
at 05:06