Menu
Home » news » Saraki LIED, I Drove The N298m SUV From His Lagos House Before Seizure - Driver Opens Up With Evidence ...See Copy of Evidence Here

Saraki LIED, I Drove The N298m SUV From His Lagos House Before Seizure - Driver Opens Up With Evidence ...See Copy of Evidence Here 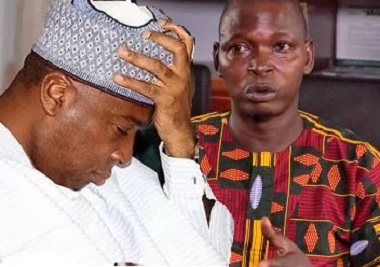 A haulage driver named Ojo Aloba has stated that he was hauling the Range Rover imported for use by Senate President Bukola Saraki before officers of the Nigeria Customs Service (NCS) intercepted and seized the vehicle. In addition to seizing the Range Rover, reportedly for irregularities related to the use of fake documents to significantly reduce the import duty for the car, the customs officers also impounded Mr. Aloba’s haulage truck.
Mr. Aloba, who owned up that he was the designated driver transporting the controversial armored Range Rover car, told a correspondent of SaharaReporters that he picked up the car from Mr. Saraki’s residence in Ikoyi and commenced its haulage to Abuja.
According to him, it was in the process of conveying the vehicle to Abuja that customs officers seized the Range Rover at Ore, Ogun State. The officers noted that the car used fake documents to clear the car. And the same documents reduced the amount of import duty assessed on the expensive car.
Mr. Aloba disclosed that the movement of the vehicle to Mr. Saraki hit a snag when some customs officials intercepted him along Ore Road and insisted on taking the car to their office. He said the officers disregarded a letter he had from the National Assembly Liaison Office explaining that the car was intended to be part of Senator Saraki’s convoy.
In an interview with our correspondent, Mr. Aloba said it was not the first time he hauled an expensive car from Lagos to Abuja for the Senate President. He added that part of what sparked the suspicion of the customs officers was an incomplete phone number written on the cover note that accompanied the car. Were it not for that discrepancy, the car would have sailed through customs checks despite its incomplete documents, said the driver.
The driver added that he tried his best to reason with the Customs officers, but on seeing that they were growing impatient, he decided to let them do their bidding.
“When I called the person who gave me the job, he said I should not move from where I was, that Senator Saraki’s people [were] coming,” said Mr. Aloba. He added: “I could not wait because they were already cocking guns. I went with them, but before we got to Berger, there were already MOPOL [mobile police] waiting, but the customs officers leading me said they [could not] wait on the road.”
He claimed that the car was purchased from Lanre Shittu, a popular automobile dealer in Nigeria. The auto dealer’s brother, Richard "Richie" Shittu, is tied to Senator Saraki. One source said Mr. Shittu often served as a middleman for Mr. Saraki, purchasing expensive automobiles for him and running other financial transactions for the senator as well.


The driver’s confession to operating the impounded vehicle contradicts claims by one Tokunbo Akindele, who in an affidavit said he was the dealer who contracted the car. In the affidavit, Mr. Akindele also claimed that Mr. Saraki was not involved in the auto deal at all.


Mr. Aloba disclosed that he had moved cars for many influential Nigerians. He lamented that, whenever he ran into the customs’ net due to stamp duty evasion or other irregularities, the car owners always left him to sort out the trouble, adding that his haulage truck was often impounded by the customs.
He recalled a case where customs officers seized his truck as he transported a vehicle for Olu Obasanjo. According to him, the customs still kept his truck after Mr. Obasanjo resolved the duty evasion problem. He regretted that a similar fate might befall him in the current controversy over Mr. Saraki’s Range Rover, explaining that customs officers were not willing to listen to his story that he was a mere haulage contractor transporting a car from one location to another.
“One [customs] officer who wanted to help me bring my truck out is now scared because of the issue. My truck is there [seized by customs]. I don’t have any means to feed my family. They are now asking me to bring N350, 000. But where will I find the money? As I am, I don’t even have 350 kobo,” said Mr. Aloba.
He said he wanted to use our medium to appeal to customs officials to release his truck, adding that all the papers for the truck were up to date.
The Letter of Authorization: 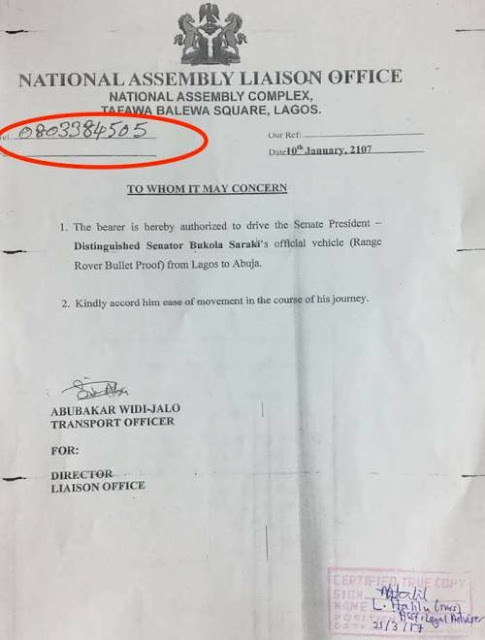 Posted by mediacop
Labels: news
Email ThisBlogThis!Share to TwitterShare to Facebook
at 07:28