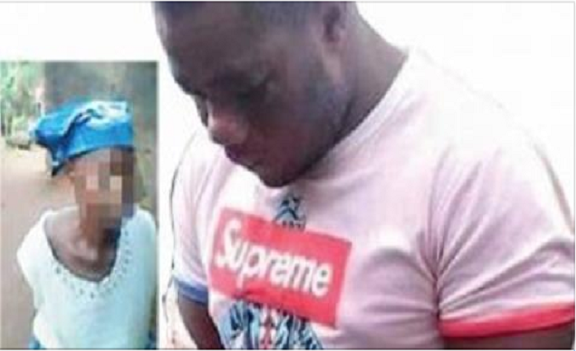 The mother of Henry Onyekachi Chibueze, also known as Vampire, the dreaded notorious robber and kidnap kingpin killed few weeks ago by the police has reacted to her son’s death.
The distraught mother, Mrs Beatrice Chibueze described him as an evil child, who had always acted like someone possessed by Agwu (Evil spirit).
Recall that Vampire was gunned down on March 2, at Umuowa bush in Ikwerre LGA of Rivers State by a combined team of Inspector General of Police Special Response unit from the Rivers State Police Command and Imo State Police Command.
Vampire’s mother told the Sun that before her son acquired national and international notoriety, he had committed his first murder when he was just 12 years old during a fight with his fellow pupil, while still in primary five at Umuokpu Community Primary School.
It was the incident that ended his formal education in primary five after the murder incident for which his late father had to pay compensation to the family of the victim.
Vampire was said to have refused to learn any trade, but rather joined some undesirable elements called hunters from the neighboring community who smoked marijuana and engaged in stealing people’s goats and fowls, which they either sold or killed and ate.
Mrs Chibueze disclosed that the deadly criminal later started a commercial motorcycle business on a hire purchase basis, operating around Isu and Anara in Isiala Mbano mostly at night, returning to the village in the early hours of the morning.


She said, “Henry Onyekachi Chibueze was born in 1981. My late husband had enrolled him at the Community School Umuokpu in Abaja, but he had to drop out at primary five after he killed his classmate during a fight at school and he was just 12 years old.
“That incident caused the family a lot of problem and my late husband had to pay compensation to the family of the boy before the matter was resolved. Henry had always acted like somebody who was possessed by Agwu (Evil spirit) and at a time the family had thought of making a sacrifice to the gods of the land to see if that could make him act responsibly.
“when he dropped out from primary school he refused to learn any vocational skill, but had instead joined some bad boys in the community where he started this armed robbery and kidnapping.
“Even though our family is a polygamous one, my late husband had ensured that all his children were educated, but it was only my son who refused to be useful like his other brothers and sisters.
“In fact, it was the disgrace and shame brought to the family that led to the death of my late husband, who developed hypertension and died eventually.”
Mrs. Chibueze said members of the family including herself ran away from their village because he was prepared to kill anybody and that before he was arrested in 2015, he had destroyed the roof of his father’s house when he visited the village.


She, however, appealed to the police to set the two children of the late criminal free, Masters Onyekachi Chibueze and Ezinne Chibuzo Chibueze who had been in the custody of the police since, adding that the kids were innocent of the crimes their father committed.

Posted by mediacop
Labels: news
Email ThisBlogThis!Share to TwitterShare to Facebook
at 07:31