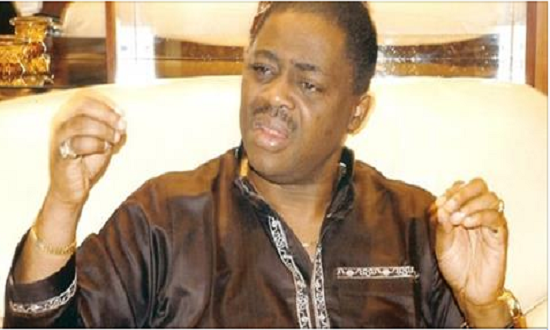 Former Minister of Aviation, Femi Fani-Kayode, has alleged that those who allegedly bombed Prophet T.B. Joshua’s church, The Synagogue Church of All Nation, SCOAN, in 2014 were behind the sexual scandal against the Senior Pastor of Omega Fire Ministries, Apostle Johnson Suleman.
Recall that one Ms Otobo had recently accused the Edo-born fiery preacher of impregnating and abandoning her.
Following her initial allegation against the preacher, the Canada based singer has continued to release more details about her alleged romance with Suleman.
In a statement on his Facebook wall, the former Peoples Democratic Party, PDP, Presidential campaign spokesperson, claimed that the “fifth columnist” in the Nigerian intelligence community were behind the scandal.
The PDP Chieftain also alleged that the forces worked to remove ex-President Goodluck Jonathan from office


Fani-Kayode alleged that the same forces were behind the helicopter explosion that killed former National Security Adviser, General Andrew Azazi and former Kaduna Governor, Patrick Yakowa in 2012.
He wrote: “There are strong speculations that Prophet TB Joshua’s Church was brought down by a remote control device and not a faulty foundation,” the outspoken leader wrote.
“General Azazi and Gov. Yakowa’s helicopter was brought down by a similar device and by the same people and not by pilot error.
“I intend to write more on both of these terrible events later and I have almost completed my research.
“For now, I will say this much: it appears that those behind both events were fifth columnists in President Goodluck Jonathan’s intelligence agencies and they were inspired, sponsored and encouraged by certain forces from outside government.
“The objective was to weaken Jonathan and ultimately to get him out of power.
“It appears that the same group are now after Apostle Suleman for daring to challenge their friends in high places and for taking on those that they are using to commit mass murder, genocide and other hideous crimes.

Posted by mediacop
Labels: news
Email ThisBlogThis!Share to TwitterShare to Facebook
at 09:45