HAPPENING NOW!!! Osinbajo On The Streets Of Biafra Preaching Unity After A Resounding Sit-At-Home Protest (Photos) 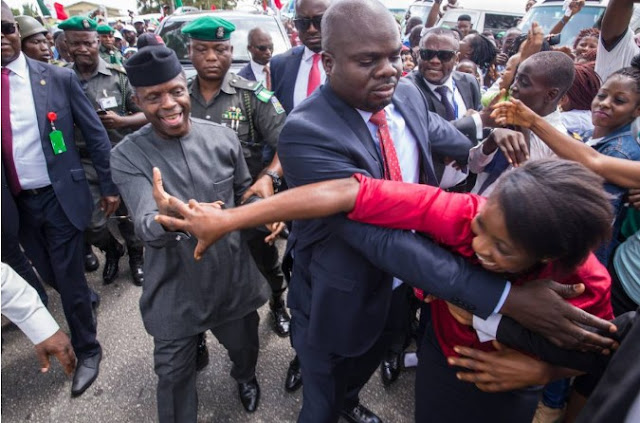 The Acting President Prof. Yemi Osinbanjo is in Biafraland hours after a resounding Sit-at-Home Protest on May 30 by Biafrans which practically grounded socio-economic activities in the entire Biafra Land. After a failed attempt in 1967 to establish a sovereign state of Biafra, Biafran activists led by Nnamdi Kanu’s IPOB are again calling for a referendum to determine the future of Biafran people.
Many observers see this visit by The Acting President as subtle move to shore up support for a united Nigeria amongst people from Cross River state. The Acting President  arrived Calabar, the Cross River State Capital earlier today, on an official visit.
The Acting President was received at the Margaret Ekpo International Airport by the Cross River State Governor, Ben Ayade after which he proceeded directly from the airport to the palace of the Obong of Calabar.
The acting president is already becoming a popular figure among school children.
Here are photos of school children struggling to get a touch of him in cross river state. While in the State Capital, Professor Osinbanjo is expected to commission some projects embarked upon by the Cross River State government.
IGBERE TV gathered that security in the state has been reportedly beefed up to ensure the safe visit of the Acting President. The city has also been redecorated and streets allegedly repainted so the state capital could wear a new look when Osinbajo arrives, The Sun reports. Governor Ben Ayade of Cross River state yesterday, May 31, told pressmen that the stage was set to receive Osinbajo. Ayade said: “We are working day and night to ensure that the Acting President takes a guided tour around the Ayade industrial park, Calabar International Convention Centre, Monorail and Power plant among others to see all we have accomplished within two years and the galaxy of our achievements within the limits of what we have.” Posted by mediacop
Labels: news
Email ThisBlogThis!Share to TwitterShare to Facebook
at 08:42