Menu
Home » news » Drama As Popular Prophetess Struck To Death By Lightning In Front Of Her House For This Single Reason.

Drama As Popular Prophetess Struck To Death By Lightning In Front Of Her House For This Single Reason. 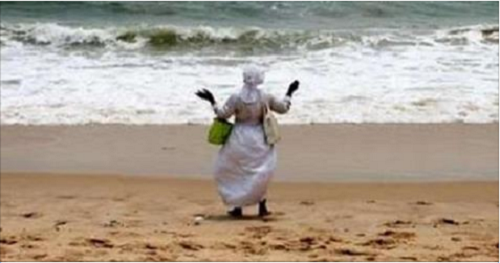 A prophetess who is the spiritual leader of the International Christian Bible church in Assin Fosu township area of Central Region in Ghana, reported struck dead by lightning.

It was gathered that the deceased who was popularly known as Prophetess Amanda, met her death right in front of her house where she was said to be packing up the wares she displayed at the provision store she ran there, while it rained on the night of Sunday, March 26.


Some neighbours revealed they saw the moment the woman was struck down by the lightning.
The mother of three was found unconscious and eventually rushed to the St. Francis Xavier hospital, where she was declared dead.

Her body has since been deposited at the mortuary.

Posted by mediacop
Labels: news
Email ThisBlogThis!Share to TwitterShare to Facebook
at 07:32