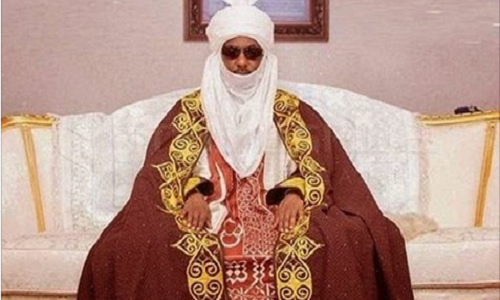 On Friday, daughter to the Emir of Kano, Muhammad Sanusi, Shahida Sanusi,disclosed that her father will gladly give up the throne if it stands in the way of truth.
Shehida made the remark while representing her father at the first annual Chibok Girls lecture in Abuja.
Stressing that the monarch had dedicated his life to the truth, Shehida disclosed that Sanusi had always wanted to be the emir, but he believes in the truth and will always stand by the truth.


She said, “My father is not afraid of giving up his throne if it stands in the way of speaking the truth. Those who think that my father would keep quiet because he wants to hold on to his throne, I think they don’t know my father.

“I know that he has always wanted to be the emir of Kano but to him, if it comes between what is right, what his conscience tells him and choosing the throne, he would happily give up the throne.


“My father has always been a part of one controversy or the other and it’s normal for us. We are not scared anymore.
“And honestly, he has been a source of inspiration and pride. He never fails to fight. He fights for progress, liberty, justice and equality. Those who think they know my father should know that he will never be silenced by blackmail and intimidation.

“He lost his position once as the governor of the Central Bank of Nigeria (CBN) and I remember his quote that you can suspend a man but you can never suspend the truth. I know he does not mind being the most unpopular emir so long he speaks the truth.”

Posted by mediacop
Labels: news
Email ThisBlogThis!Share to TwitterShare to Facebook
at 07:17