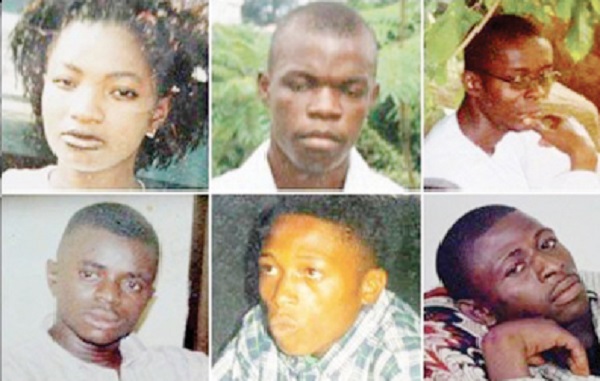 Justice Ishaq Bello of the Federal Capital Territory High Court on Thursday found two accused persons, Ezekiel Acheneje and Baba Emmanuel, guilty for their roles in the killing of six Igbo traders in 2005.

The court convicted the two men, former police officers, to death for culpable homicide.
Messrs. Acheneje and Emmanuel was fingered specifically for executing Anthony Nwokike and Augustina Arebun on June 8, a day after the face-off between the police and the six traders allegedly based on the directive of a senior officer, Danjuma Ibrahim.
The suspects are: Danjuma Ibrahim, Nicholas Zakaria, Ezekiel Acheneje, Baba Emmanuel, and Sadiq Salami while Othman Abdulsalami is still at large.
Eight policemen testified that Ibrahim ordered the killing of the traders. They allegedly killed in Apo, a satellite town in Abuja.


The victims, Ifeanyi Ozo, Chinedu Meniru, Isaac Ekene, Paulinus Ogbonna, Anthony Nwokike and Augustina Arebun aged between 21 and 25 were returning from a a night party in 2005 when they were killed.

The defendants claimed that the 5 men and one woman were robbers who had first opened fire on them and had pleaded not guilty to the charges.
Chief Olusegun Obasanjo who was president at the time had set up a panel of inquiry to look into the issue and the result indicated that victims were at a nightclub located at Gimbiya Street, Area 11 in Abuja on the night of the incident.
The most senior officer, Ibrahim had made advances towards Augustina but she refused prompting him to move a police checkpoint and inform the officers that a group of robbers were in the area.
The officers reportedly cornered them and ordered the police to shoot.


Ifeanyi and Augustina had initially survived the attack as the rest died immediately and Ifeanyi still managed to call his friends but they were taken outside the Abuja metropolis where they were killed.

Posted by mediacop
Labels: news
Email ThisBlogThis!Share to TwitterShare to Facebook
at 03:57