Menu
Home » news » BREAKING!! 44 migrants from Nigeria including babies, die of thirst in Sahara desert while on their way to Libya. (Photos)

BREAKING!! 44 migrants from Nigeria including babies, die of thirst in Sahara desert while on their way to Libya. (Photos) 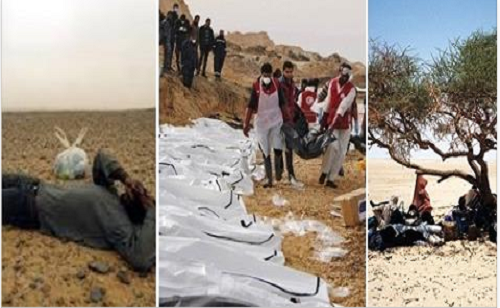 Survivors say 44 people have died of thirst after their truck broke down in the Sahara Desert in northern Niger, the Red Cross has told the BBC. The six survivors, all women, walked to a remote village and are being looked after in Dirkou, Niger, Red Cross official Lawal Taher said.
They say several children are among the dead.
The Ghanaians and Nigerians were trying to get to Libya, reports Nigerien news site Sahelien.
So far no-one has visited the site to identify the bodies, Mr Taher added.
The route from Niger to Libya is one of the main ways migrants reach North Africa before crossing the Mediterranean Sea to get to Europe.
Crossing the Sahara is one of the most perilous parts of the journey as migrants are crammed into pickup trucks often with only enough room for a few litres of water, reports Reuters news agency.
Authorities told Reuters that is it almost impossible to know how many have died in the vast and unpoliced Sahara.
Last June, the bodies of 34 migrants, including 20 children, were found in the Sahara Desert near Niger’s border with Algeria.


It appeared they had died of thirst after being abandoned by their smuggler, a government minister said at the time.
A team has been dispatched to the site by The Red Cross to gather Information on the present circumstances.
An Undisclosed security source said:

“the sub-Saharan migrants, including babies and women, died of thirst because their vehicle broke down”.

Recall that, in May, soldiers on patrol in northern Niger rescued around 40 migrants from various West African countries who had been abandoned in the desert by people-smugglers while travelling to Libya.
The group included citizens of The Gambia, Nigeria, Guinea, Senegal and Niger, all hoping to reach the Libyan coast so they could cross the Mediterranean to Europe.

Posted by mediacop
Labels: news
Email ThisBlogThis!Share to TwitterShare to Facebook
at 08:45