At Last, Notorious TOMPOLO Shot De@d In Delta By Police 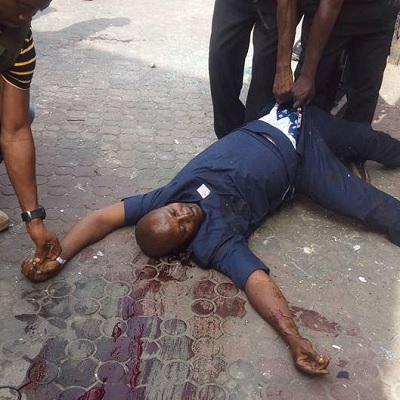 An emerging report suggests that a notorious Tompolo, (of course NOT Government Ekpemupolo, a former militants leader) has been shot dead by the men of Nigerian Police.
According to Daily Post, the Police officers of Enerhen Police Divisional Headquarters in a joint patrol with members of SEDCO Community Vigilante on Sunday, April 9 shot dead a notorious armed robber simply identified as Tompolo for allegedly robbing an unidentified woman at gun point at about 5am while three others escaped with bullet wounds in Dugbo Estate, Uvwie Local Government Area of Delta State,
Tompolo as the suspect is fondly called has been terrorizing the area until he met his waterloo.


He was shot and later confirmed dead by the Police who were on guard after he had already robbed the unidentified woman of her handbag containing huge amount of money that early morning.
It was gathered that the woman was travelling to bush market where she trades before she was attacked.


The Divisional Police Officer of Enerhen, CSP Hassan Galadima confirmed the report this morning,  according to Daily Post saying,” I’m aware of the incident. It’s not just the vigilante that killed the robber. They were on patrol with the police. We shot him and the rest escaped with bullet wounds. We recovered from them some expended and live cartridges inside the gun.”

Posted by mediacop
Labels: news
Email ThisBlogThis!Share to TwitterShare to Facebook
at 07:16