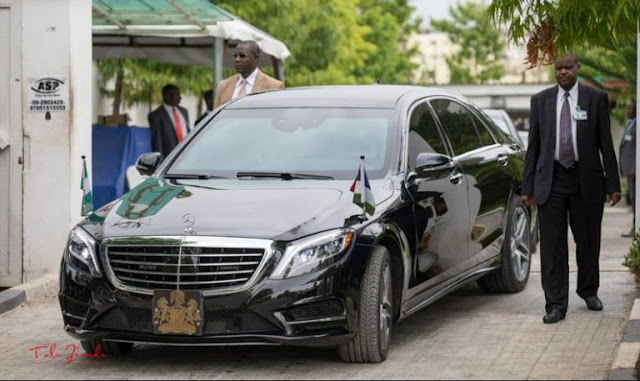 A woman on wheelchair attempted suicide in front of President Muhammadu Buhari’s covoy on Tuesday when the number one citizen visited Edo state to attend the APC Governorship grand finale campaign rally, an eyewitness confirmed to Breeze Reporters.
The drama was said to have happened around House of Assembly complex by Airport road Juncture in Benin, Edo state capital when the woman ambushed the President’s convoy, lamenting her poor living condition.
The eyewitness who identified himself as Jude Chinedu KBS, a student of Federal Polytechnic Oko, Anambra state said he witnessed the ”unimaginable…”
Narrating the incident, Chinedu said; “There was heavy military presence in King Square early this morning (Tuesday) as president Buhari was coming to join the Grand finale of Godwin Obaseki’s campaign for the September 10th gubernatorial elections in Edo State. Soon they started redirecting vehicles and in a matter of minutes Ring Road was locked down, no vehicular movement around the Square aside Police patrol vans.
“I was beside the State House of assembly by Airport road Juncture, the only side without any military presence, adding that “just a hand full of unarmed policemen and civil defense where there..
“Soon two Hilux Jeep with a road closed sign painted on top was (sic) coming with speed and the security personnel immediately ordered everyone to move to the walk way and not cross the road.
“In less than 60 seconds, the president’s convoy starts appearing from the curved corner of Airport road, they were not on the usual neck breaking speed that is the custom of Nigerian political class, the eyewitness said.
According to him, the convoy “was slow enough for you to get a good look of every single vehicle in the convoy yet fast enough for you not to be able to catch up with it in a race.
“As the convoy gets close to the house of assembly complex, this woman on wheelchair appears from no where and starts wheeling herself right across the road, he said.
The Eyewitness said; “The Jeep in front stops immediately. I was expecting some armed security men to jump out and teach the woman a lesson for daring to ambush the president but they actually stopped for the woman on wheelchair to cross!! adding ”I was dumbfounded”.


According to him, It is suicidal to attempt crossing the road when a Nigerian politician is passing.
He continued; “When the jeep stopped for the woman to cross, the woman stopped too…and it (sic) those splits seconds the driver of the Jeep seemed indecisive. Angry looking Mopol soon jumped downed from one of the Hilux vans and charged toward the Jeep in from to know why it stopped suddenly, same time a policeman dashed for the woman on the wheelchair and pulled her back.
The eyewitness told Breeze Reporters that all the drama happened in less than two minutes.
“It was when the woman grabbed the uniform of the policeman by the collar, refusing to let go and shouting “una know as i take dey eat…I no dey fit buy food again…Buhari no go pass..make una leave me make i die.”
According to Chinedu, the woman was held back till the president’s convoy passed.
On why the woman would attempt suicide in front of the president’s convoy, the Eyewitness said; I don’t know if i should call it desperation or bravery, honestly i don’t know which. But I think some Nigerians are becoming more daring. The economy is pushing people to the walls.
“I am sure the president will never get to hear that a woman on wheelchair attempted suicide on his convoy in Benin city, he added.


“It was right in front of me that it happened, he reiterated when scrutinised by Breeze Reporters correspondent.

Posted by mediacop
Labels: news
Email ThisBlogThis!Share to TwitterShare to Facebook
at 02:35