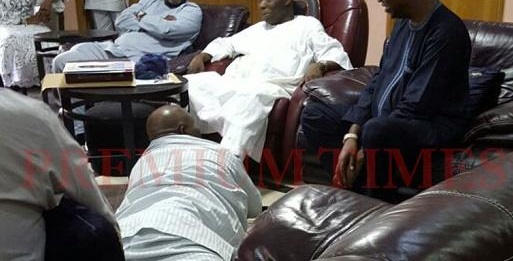 A Judge begged Department of State Service (DSSS) boss Mr. Lawan Daura when confronted with evidence that he got more than N500million bribe, The Nation learnt yesterday.

The judge refused to unlock the safe in his house for DSS operatives to have access to its contents, a source said.
The DSS, which plans to take possession of the safe to uncover its contents, is said to have been questioning bank directors over links with some of the judges.
Another judge was said to have obtained a loan from a bank to execute a contract in Bauchi State and when he defaulted, the bank filed a suit against him at the Federal High Court in Bauchi.
Also, it was learnt that most of the judges against whom the DSS launched sting operations at the weekend had been under “painstaking investigation” in the last one year.
As at press time, the DSS had started questioning some bank chiefs and directors implicated in money laundering and huge bribery scandal.
But, amid more revelations on the corruption in the Judiciary, the DSS yesterday intensified the grilling of seven detained judges.
Those detained are two Supreme Court Justices ­– Sylvester Ngwuta and Inyang Okoro; – the suspended Presiding Justice of the Court of Appeal, Ilorin Division, Justice Mohammed Ladan Tsamiya, who was picked up in Sokoto; Justice Adeniyi Ademola (Federal High Court); the Chief Judge of Enugu State, Justice I. A. Umezulike; Justice Kabiru Auta of Kano State High Court; and Justice Muazu Pindiga (Gombe State High Court).
The source said: “Corruption in the Judiciary was based on our intelligence gathering and alerts from informants and petitions. It is not based on the perception of Nigerians. We have been on the trail of some of these judges in the last few months.
“For instance, we started probing one of the seven judges in detention since the Ramadan period of 2015. When we got sufficient intelligence on him, bordering on over N500million bribe, we invited him.
“The judge was given a copy of our report on him. By the time he read it halfway, he prostrated, held the legs of the security chief and begged for forgiveness. We captured the way he was reeling on the floor.
“We later sent a security brief on him to the National Judicial Council (NJC) with enough evidence. But he was cleared by the NJC as having committed no wrong. Since the NJC could not do the needful, we have decided to subject him to a judicial process.


“We also have a case of one of the judges who refused to unlock a safe in his house when our operatives went to his house. We may actually secure the leave of the court to relocate the safe to Abuja.
“Another detained judge got a contract from Bauchi State Government and obtained a loan from a bank. But when he defaulted in paying back the facility, the bank filed an action against him before the Federal High Court in Bauchi. What is the business of a judge with contract?”
Another source gave insights into the ongoing operation against 15 judges by the Service.
“We are digging more and getting fresh revelations from these judges. For instance, a Federal High Court judge in detention actually spread the N54million and $171,779 recovered from his residence in different rooms. He kept them in different parts of the rooms like a thief.”
Apparently referring to the criticisms against the sting operations, the source said:
“Some individuals have been bigger than Nigeria. If you are looking for one or two, go to the Judiciary.
The DSS mandate is to look into anything that is detrimental to Nigeria’s national security interest and to prevent it.
“There is no immunity conferred on judges, we are only duty bound to protect the court because it is a sacred place, a temple of justice. Once you have issues, you go to court but immediately a judge is outside the court, he or she is like you and me.
“There is nothing unusual about the arrest of judges other than it has not been the practice. But it is normal. Once a petition is lodged, it is normal that you just have to look into it as a security agency.”
There were indications yesterday that the DSS had started grilling some bank chiefs and directors on allegations of money laundering and involvement in huge bribery scandals.
The source said: “We have started looking into allegations against some banks; we have torn all banks apart. Some bank chiefs have been coming to the DSS office in Abuja for clarifications on some transactions we are investigating.
“Every week, not less than three bank officials come here. We will let you know the outcome soon.”

Posted by mediacop
Labels: news
Email ThisBlogThis!Share to TwitterShare to Facebook
at 08:27