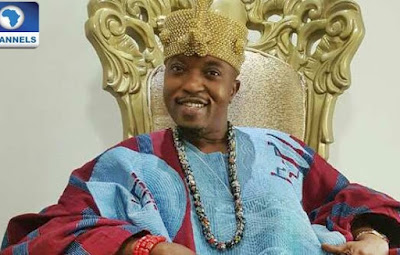 An Osun State Magistrates’ Court yesterday issued a bench warrant of arrest against the Oluwo of Iwo, Oba Adewale Abdul-Rasheed Akanbi.
At its last sitting on December 2, Chief Magistrate Olusola Aluko threatened to issue the bench warrant of arrest if Oba Akanbi failed to appear before him in compliance with the court order on November 25 in a case filed against him by the Oluwo of Iwo-Oke, Oba Kadiri Adeoye.
Oba Adeoye was in court but Oba Akanbi sent another monarch, Ologburo of Ogburo, Oba Asimiyu Sadiq, to represent him.
His absence drew the anger of Magistrate Aluko.

Oba Akanbi’s counsel Olayide Yekeen said his client submitted the notice of preliminary objection, challenging the jurisdiction of the court to hear the case on November 15 and that by careful perusal of the State Magistrate Law, Section 19:1, the court cannot entertain the matter.
He said: “It is the threshold of all cases that whenever the issue of jurisdiction is raised, it is to be taken first.

“I hereby issued a bench warrant against the first respondent while further proceeding on the matter is adjourned till December 27.”
Oba Adeoye had approached the Magistrate Court, accusing the Oluwo of concealing some facts about his past to the government when he was installed as a first class monarch about a year ago.

In a 33-paragraph affidavit, the Oluwo-Oke said Oba Akanbi’s character did not befit a person of his status and calibre as he was used to carrying thugs, miscreants and hoodlums around to harass, intimidate, molest and attack his perceived enemies.

He further alleged that the Oba Akanbi forged his name to obtain travelling documents to the United States where he was jailed in New York City and deported to Nigeria in 2000.

He added that Oba Akanbi later travelled out with his real name to Canada in 2001 and became a Canadian citizen but was also arrested in Toronto and was in jail between 2006 and 2007, saying these facts were concealed from the government.

He also accused him of presently making money through internet fraud and was using his palace as a cover-up.
But Oba Akanbi reacted to these allegations in a 13 paragraph affidavit through the Aremo of Iwo, Chief Adelani Akanbi, who described the application as “scandalous, vexations and designed to embarrass, blackmail and ridicule the monarch in the view of right thinking members of the society.”

Posted by mediacop
Labels: news
Email ThisBlogThis!Share to TwitterShare to Facebook
at 14:28