JUST IN: Tears, Sorrow as Boat Accident kills 13 in Nigeria 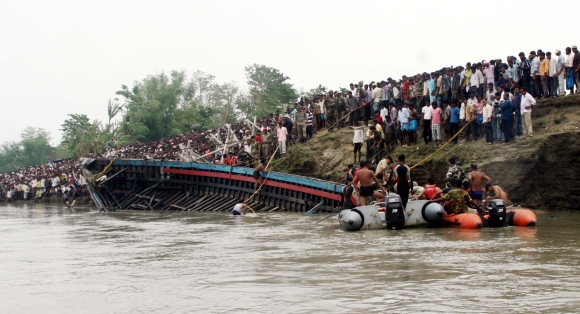 No fewer than thirteen people, comprising 13 females and two males, have died in two separate boat accidents in the early morning of Tuesday when the boat they were travelling on capsized .
The PUNCH reports that on Friday, that the accident involving the females occurred on the Kontagora River in Magama Local Government Area of  Niger State.
Our correspondent learnt that 17 villagers were going to a farm to harvest groundnuts when the accident occurred.
Six out of the passengers were said to have been rescued by divers, while the rest drowned. Among the dead were married women and underage girls.
Eight bodies had been recovered as of the time of filing this report, while divers were still searching for the remains of three victims.


Kontagora River, a tributary of River Niger had overflowed its bank following a heavy downpour the previous night, resulting in the tragedy.
The Director-General, Niger State Emergency Management Agency, Mallam Ahmed Inga, explained that there was rain upstream and the travellers did not know that more water was flowing towards them. He pointed out that the local current is always strong in the morning, especially when moving against the tide.
It was learnt that the deaths on the river had  increased following the works on the abandoned Kontagora Dam by the Federal Government. Over eight people lost their lives in 2015 when their boat capsized in the middle of the river.
Meanwhile, two other persons have also been confirmed dead in a boat accident at New Busa, in Borgu Local Government area of the state.
Inga said that the victims died last week when they were travelling in the waterways from one part of the council to another.

Posted by mediacop
Labels: news
Email ThisBlogThis!Share to TwitterShare to Facebook
at 08:19