JUST IN: Igbo Leaders In Crucial Meeting, See Their Reason {Must Read} 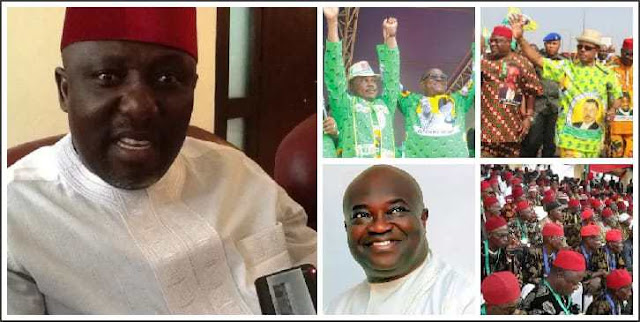 Southeast leaders are making moves to curb the crisis brewing in the region, Igbo Leaders of Thought (ILT) says it will meet to map out strategies for lasting peace
In a bid to ensure peace in the organisation, South-east pressure group, Igbo Leaders of Thought (ILT), has waded into the crisis rocking the South-East Governors’ Forum (SEGF).
The state chief executives have not met to articulate policies or programmes that would benefit the people as a geopolitical zone for over 18 months now.
This was made known by the Secretary-General of the ILT, Professor Elochukwu Amucheazi, while speaking in an interview with Vanguard, Sunday night.
Amucheazi said members of the ILT had visited three out of the five governors in a bid to resolve the matter, adding that they were waiting for reply to the letters written to the remaining two for meetings with them.
Sources told Vanguard in Enugu that the major cause of the crisis in the SEGF was the issue of who becomes the chairman of the group. The SEGF met regularly when former governors Peter Obi of Anambra, Theodore Orji, Abia; Sullivan Chime, Enugu; Chief Martin Elechi, Ebonyi and Governor Rochas Okorocha, Imo were in the saddle.
However, it was learnt that the SEGF has not had any chairman since the former Governor of Anambra State, Peter Obi, left the position after his eight-year tenure in office, and handed over to his then counterpart from Abia State, Theodore Orji


Although Orji’s brief tenure was said to have been vibrant, he has not been replaced since he left the position about a year and nine months ago.
Like the leadership of Ohanaeze, the chairmanship of the SEGF is rotatory, but Orji did not hand over formally to any of his colleagues, even as the position had remained vacant since then.
According to sources, Governor Okorocha of Imo State reportedly made overtures to his colleagues to allow him continue from where Orji stopped but his request was not granted as the governors allegedly developed cold feet over the issue.
He is currently building “a befitting secretariat for Ohanaeze Ndigbo at Enugu to replace its present office donated by the former governor of Enugu State, Dr Okwesilieze Nwodo, in 1990s.
Apart from Okorocha, who was said to have schemed to become the chairman without success, the “new” governor of Anambra State, Chief Willie Obiano, is believed to have shunned the governors’ forum as he has not attended the meeting for up to two times since he assumed office about three years ago.
The last time some of the governors attended the meeting of the forum was in the first quarter of last year, during the crisis trailing the killing of MASSOB and IPOB members at the National High School, Aba, Abia State on February 9, 2016.


Okorocha who is laying claims to the chairmanship of the forum “as a ranking governor” read the communique on the occasion.

Posted by mediacop
Labels: news
Email ThisBlogThis!Share to TwitterShare to Facebook
at 09:22