HEARTBREAKING!! See What Nigerians Did In Airport As UK Deports More Nigerians Back Home (SEE PHOTOS) 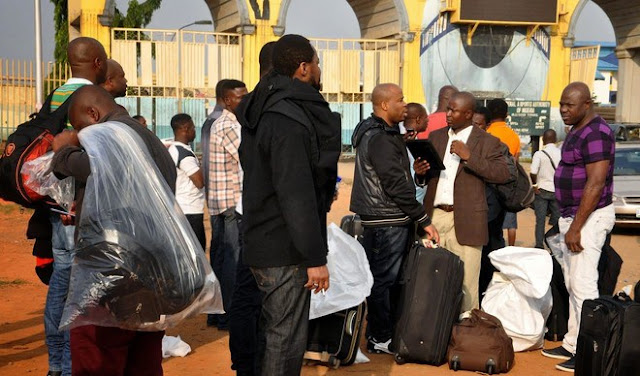 No fewer than 83 Nigerians are expected to arrive in the country today (Wednesday) following their deportation from the United Kingdom.
It was gathered that among those to be deported were residents whose documents had expired and prisoners whose terms of imprisonment were nearing completion.
The spokesperson for the National Emergency Management Agency, South-West Zone, Ibrahim Farinloye, said the deportees were expected to be in the country at 5am.
He said they would arrive through the Murtala Muhammed International Airport, Ikeja, adding that officials of the agency and other government workers were expected to receive them.
Farinloye said the prisoners would complete their jail terms in Nigeria.


He said, “We were informed that 83 Nigerians would be deported from the United Kingdom on Wednesday morning. Some of the people affected are those who haven’t completed their prison sentences. They would be taken to Nigerian prisons to complete their terms. Although we cannot tell the various offences, we believe others could be drug-related and immigration problems.
“We expect that when they arrive in the country, we would be able to know the real reason for their deportation. The aircraft is expected to arrive in the country at 5am at the Murtala Muhammed International Airport.”


If you don’t have anything to do and you have no guarantees, no need to run away from Nigeria

Posted by mediacop
Labels: news
Email ThisBlogThis!Share to TwitterShare to Facebook
at 09:10