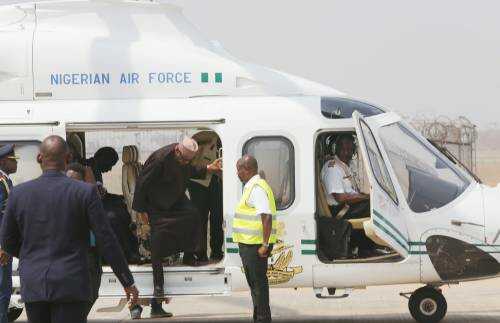 SaharaReporters has learned that some of President Muhammadu Buhari’s aides have renewed attempts to return him to the seat of power in Abuja before the possibly eight-week closure of the Nnamdi Azikiwe International Airport in the Federal Capital Territory Abuja.
The airport is scheduled to be shut down for at least six weeks starting from midnight on March 7, 2017. President Buhari left Nigeria on vacation on January 19announcing that he would be back in Abuja on February 6. However, on the planned date of return, President Buhari wrote to the Nigerian Senate extending his return to Nigeria indefinitely. The Nigerian leader told senators that he would remain in the U.K. to await the results of tests ordered by his doctors.
Presidential spokesmen have been adamant against revealing to Nigerians the specific nature of Mr. Buhari’s illness. Instead, they have either claimed that the president was merely resting in London or that he was undergoing some medical checks that necessitated a delay in his return to Abuja.
Saharareporters was the first to disclose that President Buhari would need more than the initial ten days to deal with myriads of health challenges that have dogged him for months. Sources close to Mr. Buhari disclosed that the president’s doctors in the U.K. have recommended that he stay in London for as long as four months in order to complete a rigorous regimen of treatment for a prostrate-related ailment as well as Crohn’s disease.
Our sources revealed that President Buhari is afflicted with internal organ disorders that have caused him to lose weight and wrecked his appetite.


“Some of Mr. President’s associates are mounting pressure on him to return to Abuja as soon as possible, and especially before the [Abuja] airport is temporarily closed,” a knowledgeable source told our correspondent. He confirmed that President Buhari was yet to complete his treatment for his prostate ailment as well as Crohn’s disease, a condition that plagues his intestines.
Our sources said President Buhari’s inner circle, led by his cousin, Mamman Daura, and his personal assistant, Tunde Sabiu (also known as “Tunde Idiagbon”), were behind the decision not to disclose the nature of the president’s ailments to the Nigerian public. The two insiders are reportedly managing a cabal around Mr. Buhari to control and leverage power in Abuja.
Our investigation showed that the cabal had effectively shoved aside President Buhari’s wife, Aisha Buhari, relegating her to Abuja. Instead, one of President Buhari’s daughters, Halima, is now the only direct relative given free access to the ailing president in London.
Halima, a daughter from Mr. Buhari’s first marriage, recently returned to Abuja on a British Airways flight. One source claimed that her return to Abuja was possibly to prepare for her father’s temporary return to Nigeria.
Our sources revealed that, even if President Buhari returns soon, he would need to travel out again to London in a few months to continue his treatment.
“It doesn’t make sense for Mr. President to return to Abuja immediately just to serve the political interests of some people when his doctors want him to go through all his treatment,” one of our sources said.

Posted by mediacop
Labels: news
Email ThisBlogThis!Share to TwitterShare to Facebook
at 09:02