BREAKING NEWS: Fulani herdsmen 'on the run' as EKITI blows h0t, remands ONE in prison 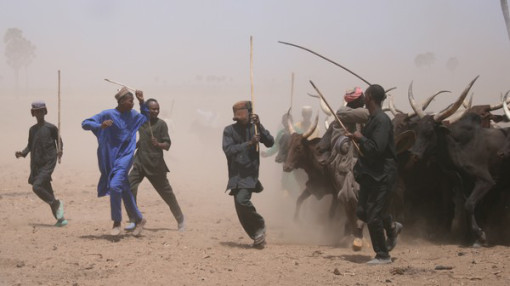 A herdsman, Abubakar Usman, 30, appeared before an Ado-Ekiti Magistrate Court on a two count charge of illegal grazing and possession of weapons.
The prosecutor, Bankole Olasunkanmi, said Usman with others at large invaded a farm settlement, belonging to one Bunmi Akingba in Iyemero-Ekiti in Ikole Local Council of the state.
Olasunkanmi said the defendant allowed his herd graze on the 70 hectares cassava farm, destroying crops valued at N25 million.
He said the offence contravened section 2(i) and punishable under Section 7 of Prohibition of Cattle ‎and other Ruminants Grazing, Ekiti State Law 2016.


He said the defendant and his accomplices had dangerous weapons in their possession which contravened section 4(1) of the Prohibition of Cattle and other Ruminants Grazing of Ekiti, punishable under section 11 of Ekiti State Kidnap and Terrorism Prohibition Law 2015.
No plea was taken by the defendant.
Olasunkanmi told the court Usman’s case file had been forwarded to the Director of Public Prosecution, DPP, for legal advice.
Chief Magistrate, Idowu Ayenimo, ordered the accused be remanded in prison till 3 March pending advice from the DPP.

Posted by mediacop
Labels: news
Email ThisBlogThis!Share to TwitterShare to Facebook
at 04:43