BOMBSHELL: Pictures don't lie, BUHARI sent Osinbajo to my house begging for support but I said NO! I don't support dictators - Femi Kuti 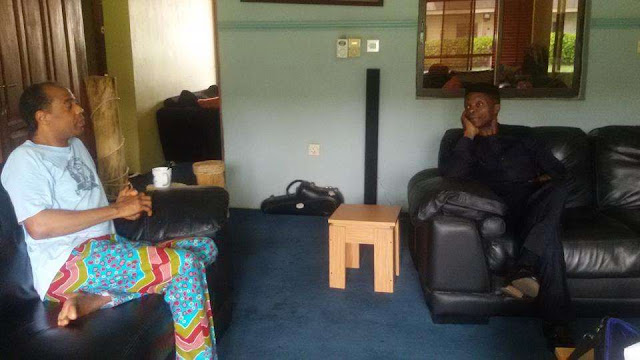 PARIS, DECEMBER 14, 2016: (DGW) The President of Nigeria, Muhammadu Buhari, appears to have been losing popularity in rapid succession with many Nigerians at home and in the diaspora as a result of his leadership style which borders on highhandedness.
The latest of such is from , Femi Kuti, the  Afrobeat maestro, who narrated how he openly snubbed Buhari when he came to ask for his support in the run up to the 2015 presidential election.
He said, he openly humiliated President Buhari when he sent his then running mate Prof. Osinbajo to solicit support from him  but he told him point blank he can never support a person who jailed  people indiscriminately including his late father, Fela Anikulapo Kuti.
Speaking further and showing the photograph above he snapped with Osinbajo  in his Akute residence in Ogun State, the Afrobeat King said he can never campaign for any political party or a politician, calling attention to how his late father was incarcerated during the military regime of Buhari.


His words:
“He came to ask for my support I refused, I told him there was no way I could support a man who jailed my father,”
“Never have I placed my support for any political party or politician. Thank God the VP is still there and can confirm. I vehemently said NO.”


The witty remark was in sharp reaction to rumours making the rounds that he has lost his voice which could be interpreted to mean his tacit support and endorsement of the present Abuja regime under President Buhari.

Posted by mediacop
Labels: news
Email ThisBlogThis!Share to TwitterShare to Facebook
at 14:36