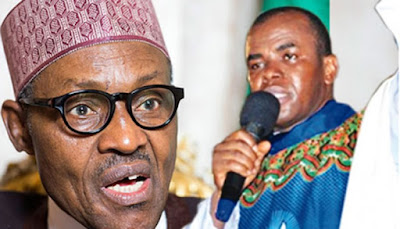 Fiery Enugu cleric, the Rev. Fr. Ejike Mbaka has come out hard on President Muhammadu Buhari accusing him of inflicting pains, suffering, and massive deaths on Nigerians.
DAILY POST recalls that Mbaka, the director Adoration Ministry Enugu, Nigeria, AMEN, had before the 2015 general election predicted that former President Jonathan would be roundly defeated in the polls.
He had in the message entitled “From Goodluck to Badluck”, accused Jonathan of running the economy aground.Soon after Buhari was sworn-in as President, Mbaka visited him at the Presidential villa where they met behind closed doors. He had also in another message while President Buhari was away on medical trip, stated that some persons were blocking him from having access to the President.
However, in one of his latest messages released to his congregation, the Roman Catholic priest maintained that with the way things were going, Buhari would be rejected by Nigerians in 2019.
He slammed the President for occupying himself with trivial issues like the emergency of Bukola Saraki and Ike Ekweremadu as the Senate President and the Deputy respectively, while the country was on fire.
“The issue is that Mbaka is speaking as the Spirit leads him; there is hunger everywhere; my job is to tell leaders the truth, the landlords are crying, the tenants are lamenting, sellers are crying, buyers are lamenting; there is hunger on the streets (onye obuna na ajazi eze) people are talking harshly, there is a channel called Aljazera, (ndi an aja-eze), many students are being rusticated out of school because they cannot pay school fees; the fees are being hiked. Proprietors are distressed, many companies are winding up; the economy is relaxed, Nigeria is being attacked ferociously and you are the citizens as well as the members of the church.


“So, when you are being attacked, the church is being attacked, that’s why I can’t keep quiet when things are going wrong. I am telling the President to look around him and know those who are advising him rightly and those who are telling him that there is no trouble; the President should know that there is trouble; if things continue like this, in the next election, nobody will vote for him.
“Whether they like it or not, I am giving the raw truth; if the President should have somebody like me and he cannot be talking with me, then there is a problem; there is a problem somewhere; somebody who can advise you without asking for anything and he is representing the poor masses in the country and he won’t tell you lies; he will praise you when you are doing well and when you are not doing well, he will look at you in the face and tell you.
“I don’t need the President; I need God, I need the Holy Spirit, I need Jesus; there is suffering everywhere, people are suffering. To feed is now a problem, and a hungry man is an angry man. Hunger and anger will lead to danger.
“So, let him know whether he can do away with some advisers around him and bring in the people who are experts in economic revamp; there are people who are experts in that; let them begin to empower people, people are not empowered, they are still walking around in vicious circles, planning and planning and planning. Go to mortuaries, go to mortuaries, there are no spaces.
I repeat, myself went to Annunciation Hospital the other time to see my brother, coming in, there was no space, the whole mortuary was filled up and they told me it is the same thing in the Eastern Medical Centre and that if I go to UNTH, there is no space, the death rate is high

Posted by mediacop
Email ThisBlogThis!Share to TwitterShare to Facebook
at 05:40