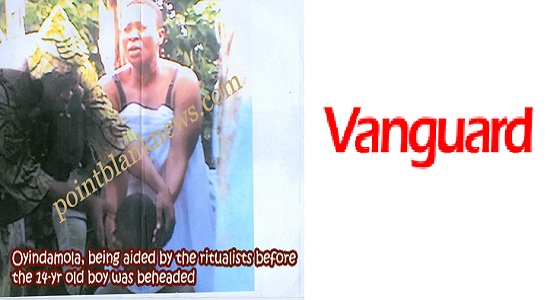 As reported by Biafra Writers. read below...
Vanguard Newspaper, one of Nigeria’s paid media outlets was founded by Mr. Sam Amuka-Pemu after an alleged dispute between him and the founder of Punch Newspaper (another Nigeria’s paid media outlet) which led to his forced resignation from Punch.
Mr. Sam Amuka was born on the 13th day of June 1935 in Sapele city of Delta State and is of the Itsekiri ethnic group in Biafra (but detected in Urhobo, the neighboring ethnic group in Delta State, for his ungodly role in the Urhobo-Itsekiri crisis). He later got married to Mrs. Oyindamola (of Ondo State origin).
Mrs. Oyindamola’s advent in Sam’s history was the major factor that unveiled the hidden and evil Mr. Sam, who before then was seen as a modest fellow.
Mr Sam Anuka’s secret and sacrilegious lifestyle was first made known to the public by a zealous and dutiful Lagos-based freelance reporter, Mr Steve Ogwu-Chinuwa, who garnered his facts by painstakingly keeping a regular vigil and surveillance at a shrine ran by a gang of Islamic cleric ritualists in Igbalu village at Ijeda via Ikorodu, Lagos State.
Mr. Steve Ogwu-Chinuwa acted on a tip about suspicious regular visits to the aforementioned shrine by one woman. According to the report, his background checks on the ‘’particular madam’’ revealed that the woman was no other than Oyindamola, the Owo, Ondo State born wife of Mr. Sam Amuka, Publisher of Nigeria’s Vanguard Newspaper.
On one of Oyindamola’s visit to the shrine, Mr. Steve was shocked to witness Mrs. Oyindamola taking part on the gory beheading of the unknown fourteen-year-old boy.
In Mr. Steve’s report, Mrs. Oyindamola held onto the already hypnotized boy’s head and chanted incantations before the helpless boy was eventually beheaded.
Having captured this event with his lens, Mr. Steve contacted police detectives who stormed the scene in a team of four. The four police detectives arrived from the Crime Investigation Department (CID) Panti, Lagos. Babatunde Odine Jonathan, a Superintendent of Police and Officer in Charge of Monitoring led the team of detectives.
On arrival at the scene, they arrested Mrs. Oyindamola and other suspected ritual killers with names: Alfa Fatai and Alfa Taju; owner of the shrine, Alhaji Rasheed Alayande, a.k.a. Achebe. They were all taken to Panti where Mrs. Oyindamola Amuka was detained for 3 days.
When slightly tortured, Mrs. Oyindamola Amuka confessed to the police that she went to the extent of performing the bloody rituals because of her unfaithful husband. She disclosed that her motive was to kill the woman that was dating her husband through supernatural means.
Before now, the news about occasions of sexual abuse by Mr. Sam Amuka has gone beyond rumors but has not gained the required media attention due to Mr. Sam’s deep involvement in the country’s media politics but Steve’s report provided evidence too significant to be ignored.
In spite of these facts, the crooked and unethical Nigeria media preferred to conceal this report which was rather reported by a US-based Pointblanknews.com in December 2008. According to Pointblanknews.com, Mrs. Oyindamola bribed her way out with the sum of four Million Naira (which was shared by the police officers) and fled to London thereafter.


The bribe leaked and the police fired some senior police officers involved and arrested the junior officers. Later reports indicted Mr. Sam to have machinated the arrest of Mr. Steve and his wife, Bosede, who was detained for two weeks while Bosede was incarcerated for two days.
In Mr. Steve’s words, ‘’I went to meet Pemu-Amuka at his Vanguard office to confirm if Oyindamola was actually his wife. I showed him the evidence in my camera and he answered in the affirmative, then slumped in his chair’’. ‘’I helped him to his feet and departed.’’
On any occasion of doubt about this event, the Biafra Intelligence Team (BIT) has provided Biafra Writers with the pictorial pieces of evidence as released by Mr. Steve Ogwu-Chinuwa to further substantiate this report.
The woeful story of “Evil Vanguard” will not be complete without uncovering the unprofessional Mr. Mideno Bayagbon, the fraudulent editor of this dirty media house. Mr. Mideno Bayagbon, the Editor-in-Chief of Vanguard Newspaper from 2008 till date has not performed differently from other Nigerian editors –they are unethical, dishonorable, shady and unjust.
Their influence to the socio-economic system of Nigeria contributes to about 60% of the country’s failure. Mr. Mideno has edited numerous articles dished out by Vanguard Newspaper which was later confirmed to be fallacious. Instances of Mideno’s blunders and his unethical approach in carrying out his duties as a journalist are outlined below:
• On 19th October 2015, Mideno claimed ‘’MULTINATIONAL JOINT TASK FORCE COMMENCES OPERATIONS AGAINST BOKO HARAM; PARTICIPATING CONTINGENTS TO OPERATE IN THEIR HOME COUNTRIES’’ –In response to this false story targeted at deceiving the gullible Nigerian citizens, a soldier who preferred to remain anonymous said, ‘’they have the gall to call us mercenaries, yet have not asked us to return to Nigeria and we very much doubt that we will be asked to return.’’ ‘’I am amazed at how so-called journalists are able to generate utter rubbish and get paid. Best wishes to you all and especially the men of 72 Mobile Strike Force, 7 Infantry Division.’’
• Wednesday, November 18, 2015, Mideno was instrumental in concealing the fact that scores of Nigerian soldiers were massacred by Boko Haram in Gudumbali, Borno State. This was condemned by the few sane Nigerians who called for proper recognition of those soldiers that died on duty and warned Vanguard to desist from peddling unfounded stories that are unethical of a media house.
• Mideno championed the story that was purposed to deceive Nigerian citizens that the Federal Government was in dialogue with the Niger Delta Avengers. This too turned out to be false.
As a result of the decline in patronage, Mr. Mideno has seen any report about Nnamdi Kanu and Biafra as the easiest way to revive the already sinking and miserable company.
What do you expect from a poor Yoruba opportunist who is still amazed of Biafra’s re-emergence after Awolowo and Obasanjo made them believe that Biafra was dead and buried?
Being fully aware that IPOB is not into the dirty bribery business as is obtainable in Nigeria, he has chosen to utilize the dirty financial opportunities known to the Nigerian media…hence the name ‘’Brown Envelope Journalism.’’
Mr. Sam and his benighted editor have seen the attack on the Indigenous People Of Biafra, IPOB, as the shortest route to Buhari’s bosom whose delight is on anything, person or group that will be helpful in frustrating or hindering Biafra restoration.
If Punch, the parent company to Vanguard, with all her fashioned lies and extremely corrupt practices, could not convince Biafrans otherwise; then Vanguard is believed to have embarked on a suicidal mission already. Her lies will only indict her more and make more proof of the personality her wife had exposed him to be.
Vanguard, Punch, Channels tv and other paid Nigeria media outlets have with time, made journalism unattractive. They have perverted the whole essence of journalism and have no use of the ethics.
Nigerian journalists are as hungry as their policemen. With less than a thousand dollar, they will not hesitate to peddle a lie that can claim the lives of her people.
Made to inform the people, she misinforms; created to lead, she misleads; fashioned to save, she kills; the odious and detestable Nigerian media. The epitome of Nigeria’s injustice, the pillar of perverted truth and the shield of corrupt politicians.

Posted by mediacop
Labels: news
Email ThisBlogThis!Share to TwitterShare to Facebook
at 07:49