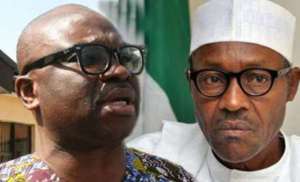 Could Buhari Be Corrupt, Fayose Ask Him To Return N1.5 Billion Naira.
In the words of the of the Ekiti state PDP chapter“equity and justice demand that Buhari should return what he got from Ekiti State treasury through Fayemi, if he is running after those who allegedly got money from the Office of the National Security Adviser (ONSA).” The party continue saying““N1.5 billion is a lot of money and Ekiti State government will only need to add some millions to be able to pay one month salary if Buhari returns the money.
“The APC government of Fayemi left office with August and September 2014 salaries of workers unpaid but the same Fayemi could donate N1.5bn to Buhari’s campaign just because he wanted to be minister


Where then is the morality in Buhari’s anti-corruption posture when he was funded with stolen fund?
“The President must therefore return the N1.5 billion stolen from Ekiti State that was used to fund his election,” the PDP said.
While reiterating the PDP’s support for the fight against corruption, the party said, “President Buhari must first remove the logs in his eyes before his attempt to remove the toothpicks in other people’s eyes can be taken seriously and the first step he must take is to return the N1.5 billion he got from Fayemi to fund his election.”
Could it be true that buhari actually took money from a corrupt sources to fund his 2015 campaign?This allegation put forward by fayose and his party is hefty and may redefine the fight against corruption championed by this administration? But fayose is yet to present a document or proved that such “allegation” actually happened. 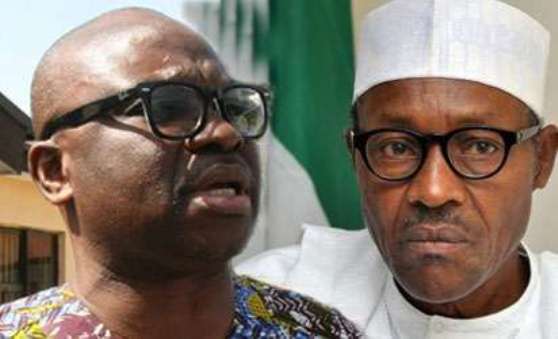 Posted by mediacop
Labels: news
Email ThisBlogThis!Share to TwitterShare to Facebook
at 04:50